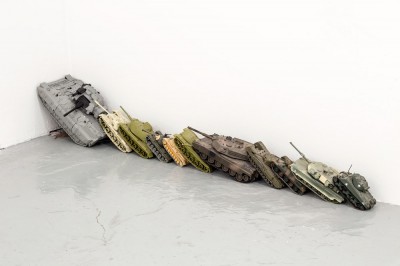 “Lick, But Don’t Swallow” is the provocative title of Blue Republic’s latest exhibition at Georgia Scherman Projects in Toronto. This two-person collective consists of art-and-life partners Anna Passakas and Radoslaw Kudlinski, who are based in Toronto and Krakow. Known for ventures into different media—from drawing to sculpture to installation—Blue Republic stays true to its (varying) form in this show. In the main gallery, site-specific wall drawings make good use of the white-cube space. The drawings were executed by the artists in-situ with black tape, in the same manner as the murals they created inside a church in the Markham Museum’s historic outdoor village for the “Land/Slide Possible Futures” exhibition last year. The imagery from those earlier murals reappears in this show. In the wall drawing Condominium #1 (2014), mountains isolated in boxes are stacked one on top of another on a floating barge, like cargo on a container ship. While a nature-versus-culture reading is tempting, the imagery here presents nature-in-culture, questioning the assumption that “nature” exists outside of human concepts. In another drawing titled The Ark (2014), the artists use coins and bills from various currencies alongside their ubiquitous black tape, forming a commentary on capitalism. The coins and bills were selected for their flora and fauna designs, with each one paired like the animals in Noah’s ark. With climate-change statistics making for harrowing headlines that render idea of a future deluge not so mythical, The Ark delivers a hard-hitting critique of society’s irrational valuation of capital. Meaning is more elusive in F Like Love (2014). This mural-sized work incorporates a canvas painting, from which a tape drawing expands out across the entire wall. Motifs like grids and skylines point to Blue Republic’s interest in urban spaces; these patterns recall the duo’s past installations of cityscapes assembled from disparate found objects. Here, too, they’ve introduced found objects—a plate, a ball and fragments of bent wire—that extend out into the third dimension. These objects in F Like Love form a nice bridge between the wall drawings and the readymade sculptures in the exhibition. Much like the show’s title, these sculptures don’t bother with subtlety. In one corner, a missile and two metal helmets have been assembled into a three-foot-tall phallic sculpture, also titled Lick, But Don’t Swallow (2014). Across the room is Cornered Fuck (2014), a row of toy tanks nestled one on top of another in a manner both profane and orderly. These sculptures elicit giggles, but their sterile crudeness is also unsettling. The imagery and titles evoke the violent sexualization of power relations in imperial military pursuits; they suggest how the Western gaze feminizes racialized others and their lands, rendering them “penetrable” and “conquerable” in terms of discourse. In grappling with such forms of violence, crudeness is perhaps apt. The tone shifts in an adjacent room, which contains video and photo documentation of Blue Republic’s outdoor works created on Georgian Bay—interventions into the Canadian Shield that place them in the terrain of the national landscape-art tradition and its debated legacy. Using just water and a brush, the artists create simple, ephemeral sketches on the surface of the bay’s Precambrian rocks. There is a barcode, a ladder, canoe paddles and a schematic diagram of a mountain. In each case, the drawing inscribes an artificial human technology onto an age-old geological formation. In the videos, the drawings gradually fade as the water evaporates under the sun. Robert Smithson once wrote in relation to his iconic work Spiral Jetty that “these fragments of a timeless geology laugh without mirth at the time-filled hopes of ecology.” In looking at Blue Republic’s exhibition, one could replace Smithson’s “ecology” with “human technology,” as Blue Republic’s work suggests an understanding of art as a very human invention—that is, enriching but temporary. The tape murals, sculptures and water drawings in this exhibition welcome ephemerality and a good joke, with little aspiration for timelessness; at the same time, thankfully, they hang on to the belief in art’s ability to carry the weighty topics of today.