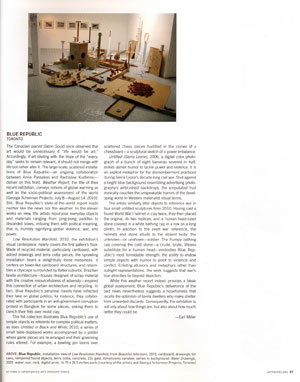 The Canadian pianist Glenn Gould once observed that art would be unnecessary if “life would be art”. Accordingly, if art dealing with the trope of the “everyday” seeks to remain relevant, it should not merge with life but rather alter it. The large-scale, scattered installations of Blue Republic – an ongoing collaboration between Anna Passakas and Radoslaw Kudlinski – deliver on this front. Weather Report, the title of their recent exhibition, conveys notions of global warming as well as the socio-political assessment of the world [Georgia Scherman Projects; July 8 – August 14, 2010]. Still, Blue Republic’s state-of-the-world report reads neither like the news nor the weather. In the eleven works on view, the artist repurpose everyday objects and materials ranging from ping-pong paddles to discarded boxes, imbuing them with political meaning, that is humbly signifying global violence, war, and power.

Low Resolution Manifold, 2010, the exhibition’s visual centerpiece, nearly covers the first gallery’s floor. Made of recycled material, particularly cardboard, with added drawings and terra cotta pieces, the sprawling installation bears delightfully loose messiness, It centers on tower-like cardboard structures, and resembles a cityscape surrounded by flatter suburbs. Brazilian favela architecture – houses designed of scrap material with the creative resourcefulness of adversity – inspired this connection of urban architecture and recycling. In fact, Blue Republic’s personal travels have inflected their take on global politics; for instance, they collaborated with participants in antigovernment corruption protest in Bangkok for some pieces, asking them to clench their fists over moist clay.

This fist collection illustrates Blue Republic’s use of simple objects as referents for complex political matters, as does Untitled in Black and White, 2010, a series of small table-displayed works accompanied by a poster where game pieces are re-arranged and their governing rules altered. For example, a bowling pin looms over scattered chess pieces huddled in the corner of a chessboard – a sculptural sketch of a power imbalance.

Untitled (Sierra Leone), 2006, a digital color photograph of a bunch of bananas severed in half, enlists darker humor to tackle power and violence. It is and explicit metaphor for the dismemberment practiced during Sierra Leone’s decade-long civil war. Shot against a bright blue background resembling advertising photography’s airbrushed backdrops, the amputated fruit ironically couches the unspeakable horrors of the developing world in Western materialist visual terms.

The artists similarly alter objects to reference war in four small untitled sculptures from 2010. Having cast a round World War I helmet in clay twice, they then placed the original, its two replicas, and a human-head-sized stone covered in a white bathing cap in a row on a long plinth. In addition to the overt war reference, the helmets and stone allude to the absent body: the unknown – or unshown – soldier. The frumpy bathing cap covering the cold stone – a crude, brute, lifeless substitute for a human head – embodies Blue Republic’s most formidable strength: the ability to endow simple objects with humor to point to violence and conflict. Enlisting allusions and metaphors rather than outright representations, the work suggests that war’s true atrocities lie beyond depiction.

While this weather report indeed provides a bleak global assessment, Blue Republic’s deliverance to the bad news nevertheless suggests a hopefulness that recalls the optimism of favela dwellers who make shelter from unwanted discards. Consequently, the exhibition is not only about how things are, but also about how much better they could be.